If you miss these things while living abroad, you are probably German – Part 1

There’s nothing more exciting than moving to a different country. It’s all new and shiny at first. Every day you are pleasantly surprised. After riding this wave of happiness for a little while, you usually crash hard, reality sets in and all of a sudden you miss all the little things that you swore you would never look back to.

It normally keeps on going up and down until you find yourself appreciating the way it’s done in your new Heimat and you keep on living happily ever after.

When Germans move away from Germany, especially to an English speaking country, we all tend to miss the same things that we grew accustomed to while growing up in Germany. It probably says a lot about us, so get a glimpse of how Germans see the world and keep on reading.

Even after living in Australia for a few years, I do of course miss things I got used to when living in Europe. Here is my list of things I miss about not living Germany. 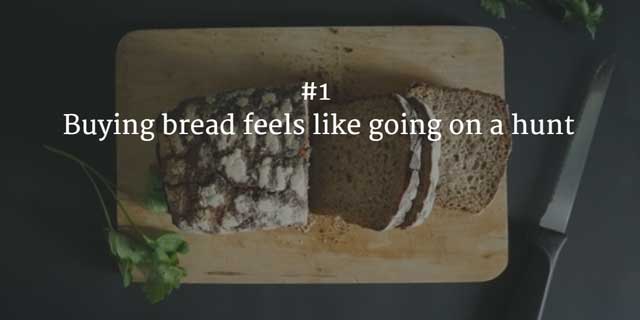 You really have to know where you get your bread from. Bread is one of the main foods for Germans. We have it for breakfast, as a side dish for lunch and of course for dinner. We have it as sour-dough, rye, bun, baguette, with salt or without and so on. You name it, Germans will have it.

Only when it’s soft on the inside and crunchy on the outside does the bread deserve to be called das Brot. Everything else, especially the white bread you’ll find in other parts of the word, doesn’t deserve the term das Brot and is named der Toast.

For finding Brot here in Australia, I developed the so-called ‘jab test’. I invented this test because a lot of the loaves look like solid sour-doughs, but aren’t actually the Deutsche Brot you can build houses with.

To perform my test, I simply jab my finger into the well-wrapped loaf and when my finger bounces straight back I know, “Narr, I need to keep looking.”

Only when it feels as I’ve broken my finger, will I jump for joy and buy in bulk, freeze the hell out of it and have my Abendbrot secured for the next three years to come.

2.) I’m not allowed to talk about Germany 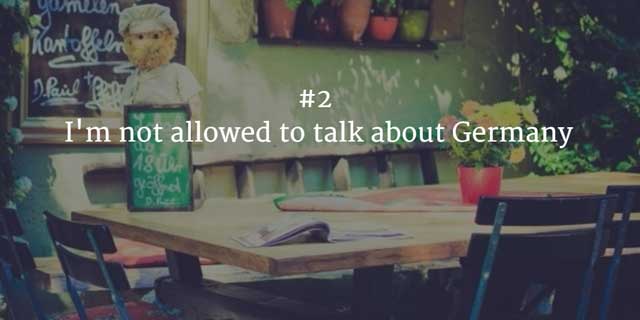 Every time I start a sentence with “In Germany, … “ my other half, non-German, finishes my sentence with “… the country where everything is better.” I know! I am happy you agree.

Apparently, I say it far too often, fair enough. But how am I supposed to talk about my life in Germany? Admittedly, for quite a while I stopped talking about Germany completely. Well, guess what? My silence didn’t last long.

Mainly, I use city names now to get my point across. And by the way, damn yes, a lot of things are awesome in Germany!

Austria and Germany make the top of the list of countries with the highest beer consumption per capita.  Actually, there is only the Czech Republic that beats us when it comes to enjoying a cold tinny.

Nevertheless, I seem to get drunk every time I go out for beers here in Australia. I believe it’s because Aussies make me drink faster than I’m used to. Normally, my first beer goes down quite quickly; every other glass though takes a while to get empty.

In Germany, yup, IN GERMANY, people feel embarrassed when they see someone drunkenly trolling around the city. In fact, we feel sorry for that person who can’t hold it together after a few beers.

Drinking beer the German way simply means slowing down, even having a glass of water before you get onto your next alcoholic beverage. Just relax. We will all make it to the finish line.

4.) You gotta drive to the shops 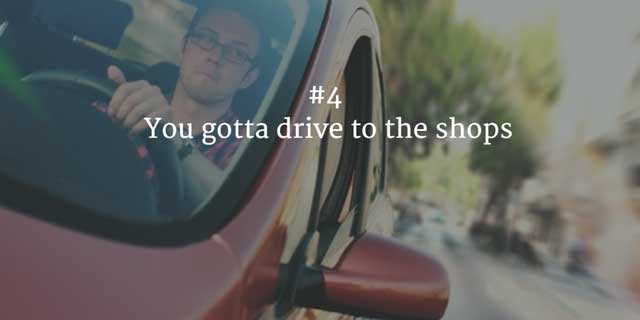 Having grown up in the German countryside, I know how it feels when you finally hold that driver’s license in your hand. You know the times of the humiliating use of public transport will finally be over and will never come back, so you hope.

But after moving to Munich, I picked up what I loved as a kid. My bike became my preferred method of transportation. You really got to appreciate how wicked it feels to just jump on your bike to go to the shops.

When riding to the shops here, I sometimes feel like I must have missed the dress code. Cycling seems to be done only for recreational purposes. Consequently, you are supposed to squeeze your Adonis body into some expensive cycling clothes, also known as lycra, no matter how short your trip might be.

There’s a bright light at the end of the tunnel though; every summer you see more and more ‘hipsters’ trying to make it safely to the next vintage shop…in normal clothes, and I’m pretty stoked about it. Mums with kids will follow!

5.) No nipples in public 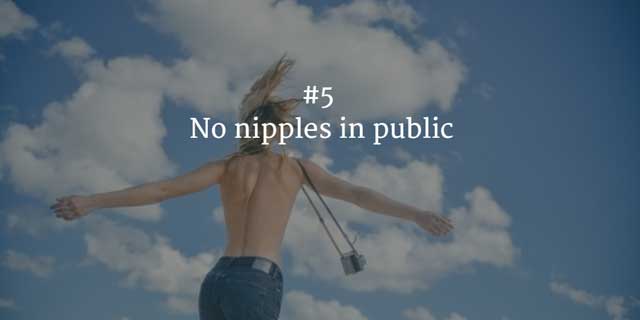 Not that I need to get naked all the time, but I do find it convenient to quickly get changed on the beach.

I got used to heading to the change rooms, though, after that one day on the beach when I saw a horrified look on my boyfriend’s face. “You think it’s ok to put on my bikini here on the beach?” I asked him with my top pulled half way across my face, and only rhetorically double-checking if the Australian etiquette may allow this. Well, it doesn’t.

Coming from a nation where being naked is called a ‘free body culture’ (nudity movement), which translates to Freikörperkultur or FFK for short, and is also organised in clubs, it’s hard to understand how nipples can cause any harm to anyone. Don’t most people have nipples themselves?

Even though I don’t understand, I oblige. I promise, I will be headed to the change rooms next time (also, I am afraid someone might call the cops).

That’s it for now. If you want to read more about it, check out Part 2 about things Germans miss while living abroad.

Don’t forget to leave a comment about what YOU miss about not living in Germany. I’d love to hear about it.

8 replies on “If you miss these things while living abroad, you are probably German – Part 1“