How to speak German fluently? Say the right things!

How to speak German fluently

a) practise their English skills on you and

b) makes it easier to converse since the other person doesn’t seem to be that proficient in German yet.

If Germans can sense their English is better than your German, they are very likely to switch to English.

Say you move to Germany, maybe  you already live there, and you really want to learn the language. You take every chance to speak German, you take courses, you learn German by yourself and now you want to practise it with all the Germans around you. You just want to speak German.

In order to improve your speaking and listening skills, we are going to talk about what you should say to keep Germans speaking German with you.

We are going to talk about how to answer the following question:

“How is your German studying going?”

When someone asks you – in German – how your German studying is going, they are probably just making small talk. Maybe they know you have been studying, so they are just up for a chat.

Remember what you are up to: You want to speak German.

Let’s have a look at the different answers to the question: 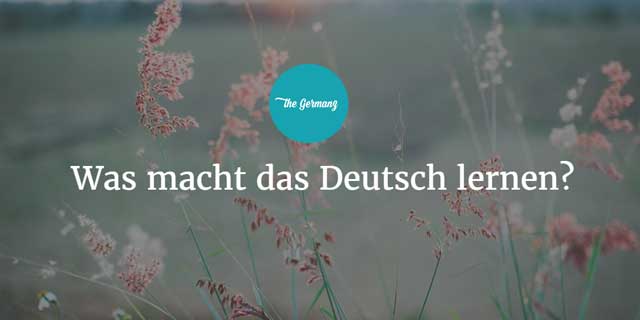 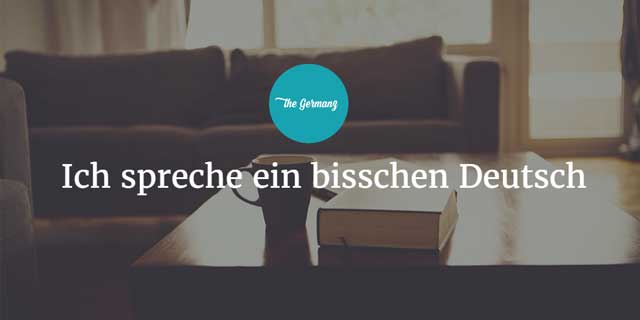 What You Want To Say

Ich spreche ein bisschen Deutsch. This is one of the sentences you learn at the start of almost any language. It is one of those sentences you use to let people know that you are not comfortable yet with the language they’re speaking to you.

Imagine you are at a bar or on the street and someone comes up to you and speaks in German to you but you don’t understand.

You could use this sentence to let people know “Ahh, I don’t really speak the language (yet) you are talking to me right now. Just to let you know, I don’t want to be rude, I just don’t understand what you just said, I’m sorry. I feel a bit uncomfortable right now but please don’t run away! Could we possibly, if you found it useful too and only if you can please switch to English please, thanks?

When I go to France and someone speaks to me in French, guess what I will say? Yes, I will say, “Je parle francais un petit peu.” What I mean is: “I’m sorry, but I don’t speak any French at all.”

What People Will Understand

When you say, Ich spreche ein bisschen Deutsch, people might think, he/she must not speak it at all even if it is obvious that your language skills are a lot better than that. But guess what they will do if they think you can’t speak German (yet). Yes, chances are, they will switch to English. This is not our goal. We want to speak German. 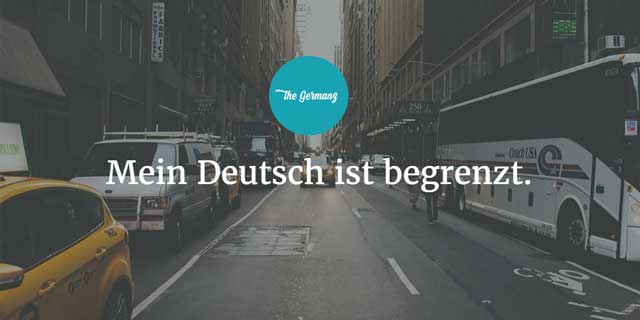 This Is What You Want To Say

Why not saying as it is?

I have done my fair share of learning German, and this is how my German is. It is not perfect, maybe even far from being perfect, but I understand what you say when you speak more slowly, clearly and I can already talk about certain topics, I can answer questions about myself, my hobbies, what I do for a job, talk about my feelings, what I like and hate. There are certainly some limits but all good. Come on, I can’t wait to speak to you.

What Others Will Understand

I like this one here. You are up for a challenge. Good on you! The only thing is, people may not know what topics you feel comfortable talking about. They could be irritated whether they can keep going or whether it would be easier for you (and them) to switch to English.

Imagine when you’re speaking to someone in English but this person’s language proficiency is far away from being a native speaker. Most of the English native speakers I know will politely switch to a better understandable English. They will slur down their speech, will use less slang and will speak more clearly.

The Dirty Secret of the Germanz

Won’t Germans do the same? Well, here is our dirty little secret:

Germans are not used to doing it! We get fewer chances to speak to language learners and even though this may have changed since Germany attracts more immigrants, there’re still reasons why a lot of Germans make the switch.

When Germans go overseas, they have to speak another language themselves, most of the time. I believe, correct me if I am wrong, but it is easier to get around and to be understood when speaking English since English is the number one foreign language to learn.

Although German is the most widely natively spoken language in the European Union, getting through your holiday may still be less painful when speaking in English, not German. Unless your holiday is in Germany, Austria or Switzerland.

A lot of the immigrants to Germany learn German quite quickly simply because they have to. Germans expect foreigners to be able to speak the language (eventually) when they live there (not at all when they don’t, by the way).

I will give you another example. After attending high school in the south west of Germany (das Saarland), I moved to Munich to study. I became friends with other Germans from the Bavarian country side. I tried so hard but there was no way to understand their Bavarian dialect sometimes.

I am a German native speaker but I was not able to grasps the meaning of some Bavarian expressions. After telling my friends about it, they would repeat what they said before but with the same words, just louder or a bit slower but still in their dialect that I just don’t speak.

Why would they do that? My friends were just not aware that I don’t know all those words they use everyday. The longer I lived there, the more I got into the dialect. I loved the sound of it before I moved there but really started to admire it once I understood it better.

I am still so impressed by my friend from Bulgaria whose native tongue is Bulgarian. She moved to Munich around the same time I did but after a short period of acclimatisation had no problems to understand the dialect at all whereas I was still struggling with it.

Also, I am pretty sure when someone moves to Saarland, where I grew up, the same thing can happen, too. And, I confess I am guilty myself of doing all this too!

What I am trying to say is that sometimes people are not aware how they can help language learners. But you can help by making Germans feel free to speak, without any limitations.

Answer: Ja geht so, danke. Und was machst du so? (Yea, it’s alright, thanks. And what have you been up to?) 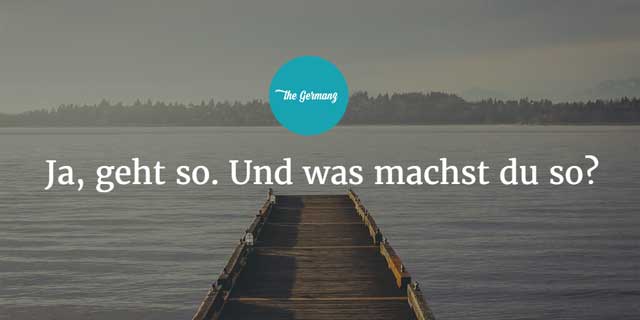 My Favourite And Here Is Why

This is my favourite response. There are lots of variations of it, so feel free to change it as you like. You want to make your language skills sound less of a problem. You don’t want to make it a problem.

What You Actually Mean

Yes, you are still learning German. You won’t be able to talk about anything and everything as detailed and colourful as you would be able to in your mother tongue but you guys will be fine. It will be a nice conversation. Come on my German friend, don’t worry about it too much. Let’s have a chat in German!

I’m working on a guide on helping with the speaking part of learning German (and any other languages). The guide will have tips and fun exercises to improve your speaking straight away. You won’t even need a native German to chat to.

Let me know you’re interested in the guide (and also put some pressure on me so I’ll finish it quickly). Here’s you’re chance:

Do you have any tactics yourself to have the Germans speak German? We would love to hear about it in the comments.

38 replies on “How to speak German fluently? Say the right things!“