Uber and the German umlaut Ü

Uber has a hard time in Germany. Not only tried some German state governments to ban the company from German streets, but Uber also faces civil disobedience and already had to pull out of three German cities.

More shocking than the fact that the Uber service has caused so much uproar is something else:

How come Uber has survived so long? How can a word survive that has the umlaut points scraped off?

Über is a German preposition meaning over or above. Uber on the contrary without the umlaut points is just weird to look at. And I’m not the only German that feels this way.

Every time I see the word, I can’t take my eyes off it. Do you know that feeling when something is so ugly and disgusting that you can’t look away? You want to but you just can’t. The word uber is terrible, outrages and appalling. Where did the points go? Uber, you can’t do that to 100 Million German native speakers!

What do you need the points for?

In fact, they are necessary to distinguish between singular and plural (ein Haus, zwei Häuser) or present and past (lügen, log, gelogen – to lie, lied, lied). Umlauts are proper sounds that have a meaning to Germans. They are letters like a,o,u or any other letter, at least when you are in Germany. They are so important to Germans, we even have them on our keyboards. 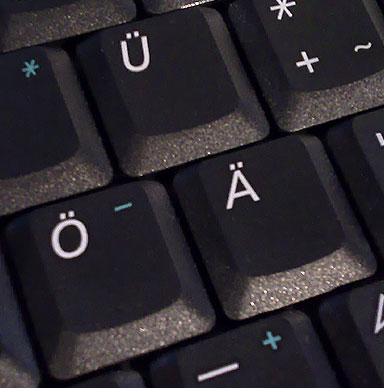 Living in an English speaking country and having a surname containing an umlaut, I can tell you first hand how it feels getting your points chopped off.

In Germany my surname is Müller. Here in Australia it is Muller, Mueller, Muler, Mular and any other combination. You name it.

Müller is the most common name in Germany as well as in the German speaking Switzerland (Gruber In Austria). It also is an occupational name and translates to Miller.

Once Germans cross the border to a non German speaking country, umlauts are usually transcripted to become more Qwerty compatible. The official transcriptions for countries that don’t use umlauts are as follows:

Müller is supposed to be transcribed into Mueller. Most of the time, people just chop off my umlaut points.

We need to remove those points

Half a century later, we found my name in the system and the glasses in the drawer. This time my name was Murloer. I hadn’t had that one before. But actually, I can’t complain, at least there was some kind of official umlaut transcription, just an oe.

Leaving a country can be a problem

Once I even had problems to leave Australia for a trip to New Zealand. They must have put me down twice in their system. It was Muller as well as Mueller. While they were figuring it out, I was standing in front of the desk at immigration, paralysed and scared. In my head I was already squatting in some corner at a police station, all alone in a cold and pitch black room. Is this going to happen to me only because of the points? ‘Please, you can have the points, all of them. I don’t need them, really.’ was going through my head.

Well, I guess I just watched Australian border controls far too often. In the end they simply merged the two Müllers into one Mueller and I was good to board the plane, and definitely ready for a holiday.

My poor friends in Germany

Finally I can really feel with my Bulgarian friend in Germany who grew up with a Cyrillic surname and has been living with a Latin transcription of it since she moved to Germany. In Latin it still looks like some consonants randomly put together. “I always use your name” she told me once, “Whenever I order a pizza or book a table at a restaurant, I will book it under Müller. It’s much easier. I don’t have to spell it, I don’t even have to repeat it but I know every time, it will be easy to call up in what ever system they might have. Müller, such an easy name.”

Life is much better since I have a proper ID with my transcribed name on it. People tend to believe me now. But if you still think, ah those umlauts can’t be that important, look at the excitement in a Facebook forum for Germans living abroad after someone posted up some umlauts and the eszet.

“Today I am going to give you some letters, use them sparingly: ä ö ü Ä Ö Ü ß.”

“I miss my umlauts! How do you do them?” 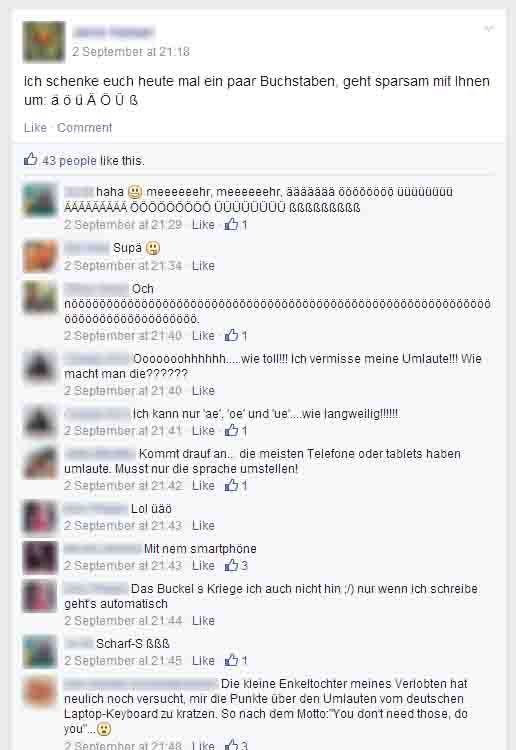 What does it mean for language learners?

What does it mean for language learner? Since umlauts are important for Germans, it’s a great idea to put some effort into learning the pronunciation of umlauts as well as vowels. You could listen to a German native speaker saying them several times, over and over again. I promise, you will hear a difference the more you listen to it.

Do you live in Germany or somewhere else and have a fancy name no one is ever going to pronounce or spell correctly? Tell us about your experiences in the comments.

56 replies on “How Germans feel about German umlauts (ä,ö,ü)“