May I introduce you to the Deppenapostroph?

Germans hate something that is known as the

It is the apostrophe that only jerks use,

Using English words when speaking German (Denglisch) is seen as very cool, young and innovative. The use of the English apostrophes on the contrary is seen as something that is potentially able to make you look like a massive jerk.

In this part 4 of our Denglisch Guide, the guide about the incorporation of English words into German, I want to share with you how you can easily avoid those pitfalls and how to sound clever and sophisticated when writing in German, too.

Just to give you an idea, here are the 3 previous parts.

What are apostrophes for?

In this post we want to talk about the use of apostrophes. They are so little but can change the meaning of a whole sentence.

John and William’s bikes got lost in transit.

John’s and William’s bikes got lost in transit.

Where to put the apostrophe?

Sometimes it’s not easy to know when and where to add an apostrophe. That’s when people end up using them in many ways, even when they are not applicable at all.

But not only English speaking people get creative when it comes to using apostrophes. Germans get confused as well. 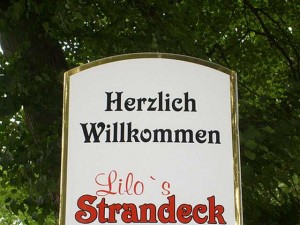 Lilo’s Strandeck? Wait a minute. Isn’t that correct? In English it is. In German, let’s say, it’s correct as well.

Indeed, the spelling that is taught in German schools is

Lilo’s Strandeck on the contrary, is what Germans call a Deppenapostroph (idiot’s apostrophe). It is the use of the (correct) English apostrophe in written German. A theory suggests it was Konrad Duden himself who sparked the public discourse about this special use of apostrophe when he wrote a story using the Deppenapostroph that was then published by mistake. Duden is the German equivalent of the Oxford English Dictionary and Merriam-Webster Dictionary.

What’s the correct use in German?

Let’s scan a few sentences to see what the discussion is about.

3.) Er hatte keines seiner zwei Handys dabei. (= He didn’t have any of his two mobiles on him.)

As you could see the problem emerges when either using a

How to get it right

die Türen des LKWs (= the doors of the truck)

Is the Deppenapostroph correct as well?

The Deppenapostroph is correct as well when forming possessives (Katrins Handy) since the spelling reform in 1996. The Duden lists

as also correct but in use only occasionally.

In real life, I can confirm the Deppenapostroph in Willi’s Würstchenbude is used a lot. Since the Duden has approved this kind of apostrophe, feel free to use it yourself. But you will look smarter if you use Willis Würstchenbude instead.

Do you struggle with apostrophes yourself? Tell us in the comments about your way to get your head around them.