Will using English words in German make me look like the scum of society? (Denglisch Guide Part 5)

Denglisch is amazing, the mix of English words with German can be very convenient for English speakers learning German. When you don’t know the German word, just use the appropriate English one, right? Well unfortunately that’s not exactly how it works.

But I won’t fail my German test when using Denglisch, will I? Or will I sound like the scum of society when using English words in German sentences?

You won’t when you remember the few things I will share with you in this post. Read this before you go out there to chat away in Denglisch.

How official is Denglisch? This is part 5 of our Denglisch guide in which we have talked about those points before:

Since we talked about Denglisch in so many posts before and Germans use it apparently many times a day, surely, I as a language learner can use it myself at anytime. But since Germans rave about Denglisch not being appropriate, shall I use it at all?

Denglisch can be mandatory

Germans can be confusing, they hate Denglisch officially but use it all the time. This is why you should totally use it yourself. Speaking Denglisch is what German natives do and to blend in with the locals it’s a great idea to start speaking too.

Even if you choose not to speak it yourself, you should at least be aware of it as in some situation you even have to use it, in situations where no German word exists for the thing, situation or activity you are talking about.

Telling everyone about the Jobtraining (das) offered by your current employer might be more precise than using Fortbildung (der) instead of it, which comes close but is not as precise. And Germans love preciseness.

No English but Denglisch, please

What I can’t recommend at all is to use Denglisch or English to compensate a lack of German speaking competence. Don’t mix proper (!) English with German in a German sentence. With proper English I mean, don’t just use the English word as it is without incorporating it into German. Don’t do things like this:

Ich bin am Computer um Sachen zu machen. (= I am at my computer to do some things.)

To answer the above question:
Yes, Denglisch is appropriate when used with correct German grammar.

Can I use Denglisch in my German test?

Another thing I want to mention here it whether you can use the cool sounding new word creations in your German test or in your correspondence at work.

Firstly, we want to have a look at those Denglisch word:

As you can see, those are slang words started by the creative German youth, they are probably less officially in use. But what about words like der Computer? Obviously, der Computer is established enough to use it in every situation, no matter how formal it might be.

How to find out

In fact, Germans love to make up new words, especially new Denglisch words. There must be other words that are only half legitimate? Yes there are and here is one.

Slang or well-grooved? The Duden, the German version of the Oxford Dictionary, indeed has the answer. We simply want to use the search on the Duden website.

Here is what will be returned when you type in googeln in the local search. Just scroll down a bit. 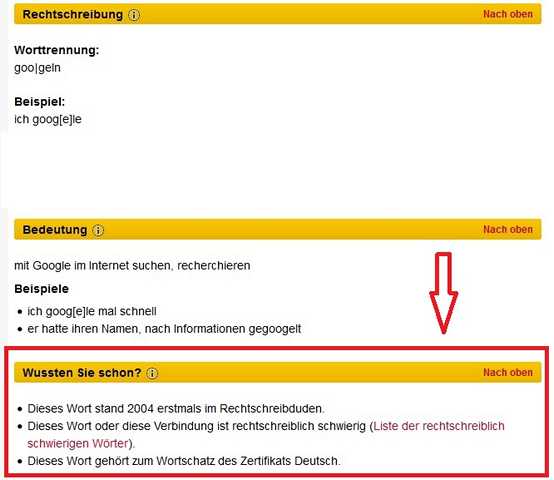 The first and the last bullet points are important. If the word has been in the Duden for 10 years, that is by all means a very reliable indication for being an established German word.

The last point makes it even clearer. Googeln is part of the vocabulary you will have to know to pass the Zertifikat Deutsch, an internationally recognised exam of German language ability (B2 of the Common European Framework of Reference for Languages).

Bam, off you go to use googeln from now on, please. Anywhere! 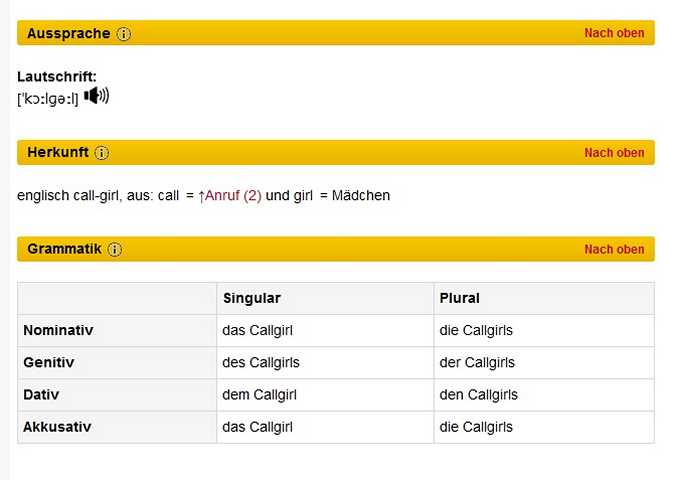 We don’t know whether the word das Callgirl has been in the Duden for a while. I also can’t figure out whether the word is part of a German language ability exam, but the Duden helps us with the pronunciation as well as the different case forms of Callgirl. That’s good enough for me to use it at least when speaking to closer work colleagues and friends (apart from the fact you won’t use the word in any situation anyway I suppose).

One more. Can I use taggen as in Sie hat mich auf Facebook getaggt (= She tagged me on Facebook)? Let’s consult the oracle. 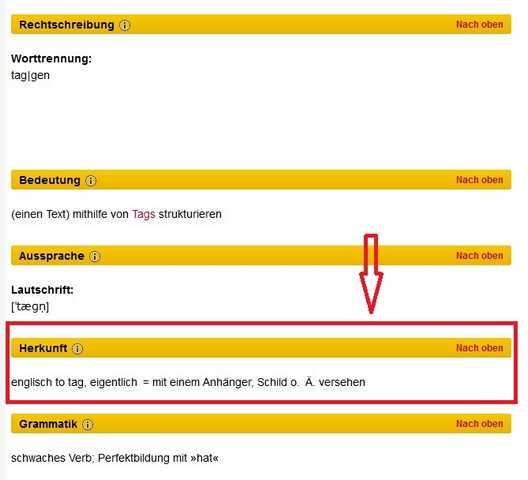 Down the bottom we find what we are looking for:

Although the Duden mentions shortly that there has been another meaning, but we don’t learn what the meaning exactly is like. For a German speaking ability test I would therefore recommend not to use it yet, but absolutely with your friends.

Speed testing: Look what’s around you

How to easily find out whether to use it or not without looking it up online?

Remember, the German verb taggen is a proper German word; still it is a slang word so far, because it has not been used by a significant amount of Germans yet.

What can help you figure out whether it is appropriate to let Denglisch slip into your speech:

If you use slang words when speaking or writing in your mother tongue then you can safely do so in German too. Just look around you and check where you are and who you are with. Are you with work colleagues or in some sort of subculture? Are you sitting a German test or are you writing an email to a friend?

Can you use slang in your German test?
Jein (Ja and nein). If it comes to sit a test, be better safe than sorry.

Do you use Denglisch yourself or do you try to avoid even words like der Computerscreen? Let us know in the comments

5 replies on “Will using English words in German make me look like the scum of society? (Denglisch Guide Part 5)“