Germans like their a, o, u with two dots: ä,ö,ü

One of the popular blog posts here on The Germanz has become the one I wrote about how Germans feel about umlauts. It’s not only me who sighs affectionately when describing German umlauts. I’d dare to say that all Germans are best mates with their ä’s, ö’s and ü’s. 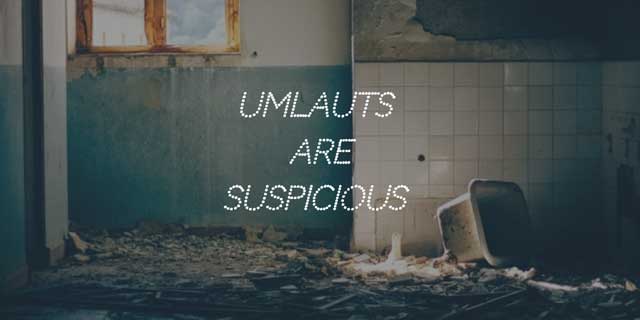 On the other hand, many German learners usually can’t understand my sentiment for these funny dots. For German beginners, umlauts are a nightmare.

‘Ah yea, what do those dots mean?’

I usually get after pointing them out in my German classes here in Melbourne.

The English brain seems to scratch them off like an ad blocker blocks advertisements in the sidebar of a dodgy website. Gone, as if they’d never existed.

After the first disbelieving stares and a couple more lessons, when the realisation sets in that ignoring the umlauts isn’t an option, the inevitable question comes up:

You think you could explain umlauts again, please?

Sure thing, I can. I’m going to spill the beans to you about German umlauts. They can actually make a big difference in what you’re saying. You can also skip right to your favourite topic:

A Umlaut, o umlaut and u umlaut are letters of the German alphabet

First thing to know, you can’t just slap those points on top of every a, o, i, e, and u you come across. Only three vowels – the a, o, and u – qualify for leading a secret life as umlauts.

That said, umlauts are proper letters. They are part of the alphabet, and – you won’t believe it – NOT for grammatical reasons.

The a, o, and u WITH two dots are pronounced differently. The ü as well as the ä and ö simply reflect a change in pronunciation.

This explains why German umlauts are spoken in the front, with your lips. You even close your lips like you’re about to kiss someone.

Additionally, it also means that umlauts are like the cousins of vowels. They belong to the same family, but are the weird in-laws you see only a few times a year.

Because umlauts haven’t made their way into the world for grammatical reasons, you don’t need to learn yet another confusing grammar rule…yay.

Since there’s no grammar to be explained, instead of ‘learning the umlauts,’ you can relax and get a behind the scenes summary of where they hide and where they make a mind-blowing difference.

1. Talking about two and more – Plural in German 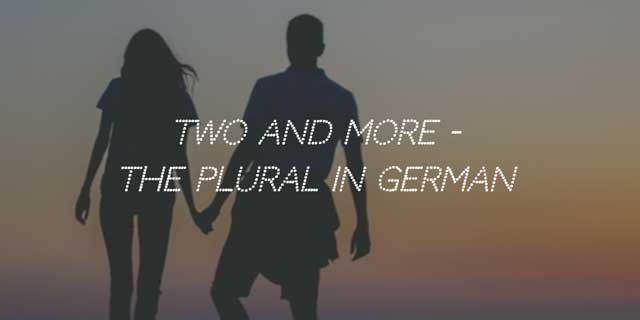 Let’s start with what you learn as a newbie to the German language, when you learn about plural forms of nouns.

Plural means having to deal with multiples of things, when you say ‘one apple, two apples’: ein Apfel, zwei Äpfel, or ‘one mother, two mothers’: eine Mutter, zwei Mütter.

The switch will only happen from a vowel to an umlaut, never the other way, only from zero to two dots.

You also may have heard about the sensational news that the average masculine word (der Mann, der Tisch, etc.) tends to form the plural by adding an -e and turning a vowel into an umlaut:

You’ll never know for certain whether this will always be the case, but if you really can’t remember the plural of a der-word, opt for adding -e and the umlaut-kiss.

A handful die-words need umlauts too

While female nouns in German usually add -en or simply -n (die Blume, die Blumen/flowers), a handful of very common female nouns only change from a vowel to an umlaut.

As you can see, swapping out the vowel for an umlaut has the potential to raise eyebrows if done incorrectly:

(I’m catching up with my mothers.)

Which is fair enough, just be aware of what you’re saying.

Next we are going to talk about a nifty trick that will save your life more than once when you get lost among all those der, die, and das articles. It also has to do with German umlauts. 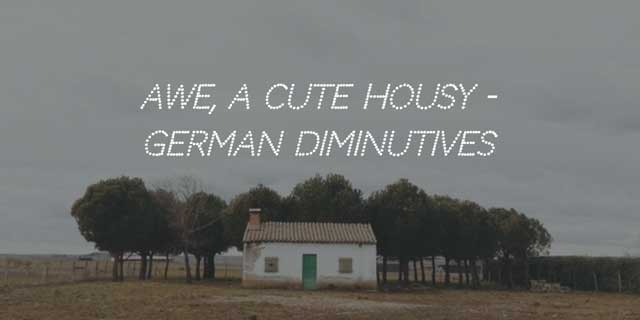 Do you know what to do when you’re halfway through a sentence and then realise that you can’t remember the right article of the word you were going to use?

I’ll tell you a trick. Instead of just staring into space waiting for the ground to open up and swallow you, form the diminutive of the word.

Simply make the table a ‘baby table’ or make the horse a little horse, a ‘horsy.’

The reason for it:

Apart from assigning the das-article, you want to add the ending -chen or -lein

change the vowel into an umlaut if you can (remember, only a, o, and u can, äöü).

‘Horsies, housy? I’m going to sound like an idiot!’ you might think, but you won’t believe the next thing I’m going to tell you.

Using the diminutive form of nouns is so common in German, it’s an essential part of several German dialects.

The Swabian dialect is even famous for it. Swabian is spoken in one of the powerhouses of Germany, Baden-Württemberg, the area around Stuttgart, where many world-famous and traditional German companies are based. Companies like Zeiss and Kärcher.

Swabians add their own diminutive ending, -le but usually also turn the vowel into an umlaut. Imagine interviews on TV with the CEOs of all these big companies! They usually try to sound very professional, but aren’t always successful at it.

If they can do it, you can too (at least before the ground swallows you).

Next one up are annoyingly irregular verbs like fahren (to drive). They sometimes do the shift as well, and of course there’s something you should know to conquer them.

3. Verbs like fahren have umlauts – Irregular verbs in German 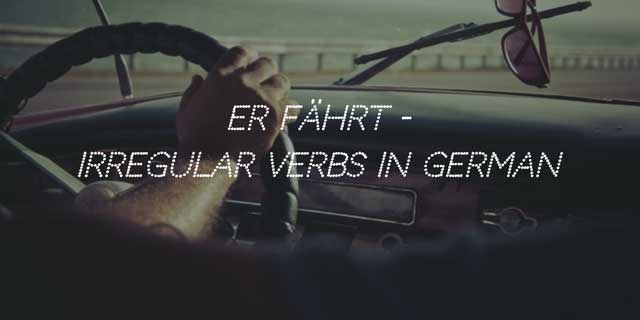 Irregular verbs do the vowel-umlaut-shift as well. It’s only the ones that sound similar to fahren (to drive/to go) like blasen (to blow), waschen (to wash), schlafen (to sleep), etc., the ones that have an ‘a’ in their stem.

Here’s how to conjugate fahren (to drive/to go):

The same will happen when you conjugate waschen:

Irregular verbs in German (also called strong verbs) only change their stem (fahr- or wasch-), but will keep the same endings as any other regular, normal verb.

They also only change the second- and third-person singular:

All other forms stay the same.

Of course, some verbs are all over the place and completely irregular. They take on a completely different personality it seems.

You probably know the suspects I’m talking about: sein (to be) or modal verbs (können, sollen, wollen, etc./could, want, should, etc.).

It’s best to get familiar with the strong and irregular verb forms by using a conjugation app and learn the most common ones off by heart.

But remember, in case you get lost along the sentence:

Irregular verbs that look similar to fahren are likely to do the shift from a vowel to an umlaut and back.

Next up is another example where knowing how to handle those sexy dots will be an advantage.

4. Talking tomorrow about today – Present or past in German 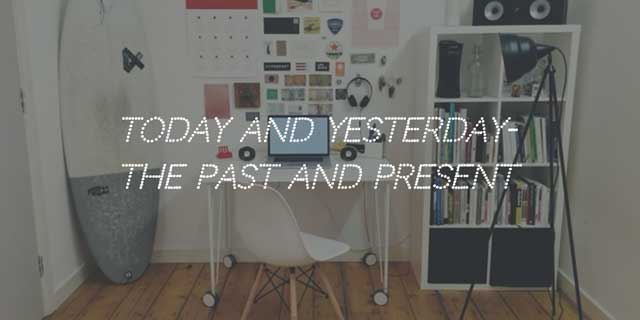 Let’s say your work colleague Markus loves venturing out and always knows exactly how to entertain the masses during lunch.

(God, Markus is hanging from the roof, please help!)

Once Markus is rescued, you can joke around at the next Christmas party.

(Do you guys remember when Markus was hanging from the roof? What a crazy chap!)

Other examples would be:

Looks reasonable, doesn’t it? But I’ve got good news and bad news for you.

The good news is that most German verbs are regular/normal, but most common verbs are irregular.

That’s why it makes sense to learn the hop, skip, and jump: betrügen, betrog, betrogen, to always have them ready to go in case you need them. And you probably will.

Also notice that the umlaut usually turns into a different vowel, for example from an ü or ä to an o.

And here’s another blissful trick:

Learning the most common irregular verbs in German by heart will speed up your speaking.

5. Things we didn’t do yesterday but would like to do today – Past or subjunctive in German 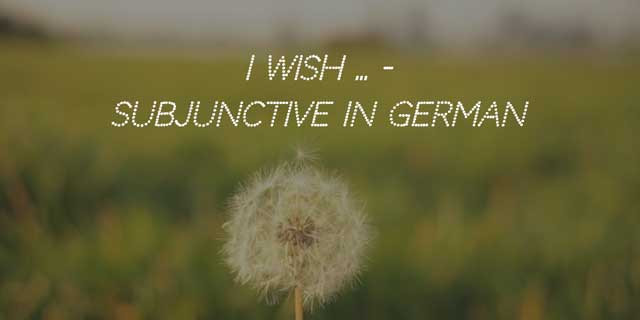 Here’s the last and most thrilling one where the shift makes a staggering difference in what you’re saying. The shift goes from a vowel to an umlaut and the other way.

When you compare the following two sentences, you will notice what I mean.

I could do it yesterday

I could do it today.

A, o, u with two dots make things become unreal

Konnte and könnte – only two dots separate the verbs, but the meaning couldn’t be any more different.

The first sentence simply describes what we did, we are giving the facts, I did it. Making factual statements is called the indicative mood from a grammatical point of view.

The second sentence describes a scenario that hasn’t happened yet; it also might not happen at all. Gosh, when I think of my to-do lists! Every time I’m jotting down the dots, I deeply believe that I’m going to finish them all off, tick them away. In the end, you might guess it.

As long as it’s not true yet, you’re speaking in the so-called subjunctive mood. A condition still needs to happen (you need to do it first) before it can become a fact. I could do it, and I might do it, but maybe not. I don’t know yet.

In German it’s the little points that matter and that will surprisingly change what you’re trying to put across.

Können is not the only one that has a dirty looking cousin.

The most important ones are dürfen (to be allowed), müssen (have to/must), mögen (like), sein (to be), werden (to become), and haben (to have):

I liked it yesterday. – I would like it today.

She had to do it yesterday. – She would have to do it today.

We had a bicycle yesterday. – We would like to have a bicycle.

It was really nice yesterday. – It would be nice if the sun was shining.

Were you able to tell the difference between the first and the second sentence in each line? I’d guess you got the feel for it.

Well done, you made it down to the bottom. This was ‘explaining the German umlauts.’

Time to sum it all up.

I’d love to know if you ‘understood’ he umlauts straight away or if it took you a while to get your head (and your tongue) around the fancy dots. Please let me know in the comments.